How to Use Python Code on Jupyter Notebook

Malhar Lathkar
Jupyter notebook is a web based interface was introduced in 2011. It supports programming environments (kernels) of Julia and R languages. (Jupyter is acronym for JUlia, PYThon and R).
Share

Jupyter notebook is one of the packages under Project Jupyter, which started as a spin-off project from IPython. IPython is an enhanced interactive Python interpreter, developed by Fernando Perez in 2001. IPython notebook, a web-based interface was introduced in 2011.

It was later renamed as Jupyter notebook by adding programming environments (kernels) of Julia and R languages. (Jupyter is an acronym for JUlia, PYThon, and R). Now it supports many more languages such as Matlab, Scala, etc.

If you are using Anaconda distribution of Python, Jupyter notebook is already included in it. To install it individually in standard Python distribution, use a pip installer.

This will install the entire Jupyter system including notebook, QtConsole, and IPython kernel. It is also possible to install a notebook only.

To invoke notebook application, run the following command from a command prompt or Anaconda prompt. The command shell shows the following log:

To access the notebook, open this file in a browser:

Or copy and paste one of these URLs:

Jupyter notebook is a client-server application. The above command starts the notebook server at port 8888 (default) of localhost. Its client interface can be opened by visiting the URL (as shown in the command shell) with a browser. 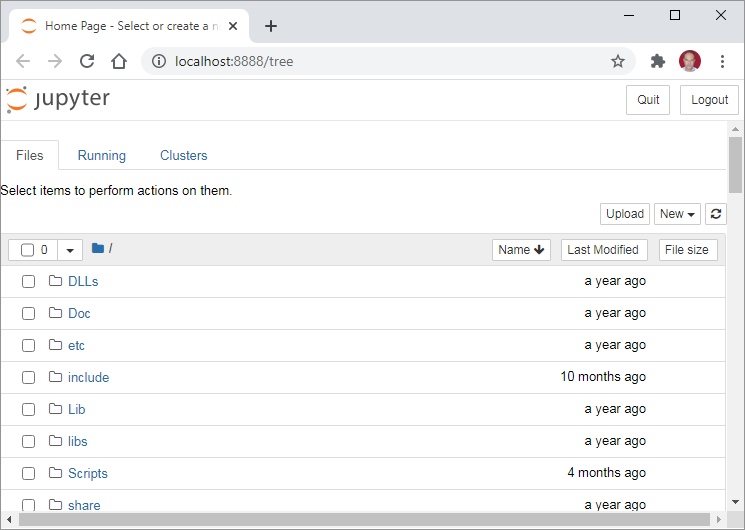 To open a blank notebook, choose Python 3 kernel from the drop-down menu under the New button. 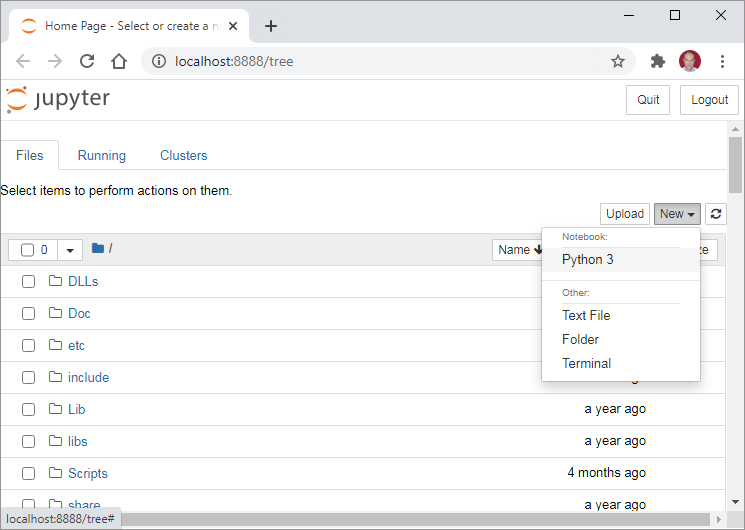 A blank notebook is opened in a new tab of the browser.

The notebook opens with a blank input cell. It acts as a traditional Python prompt (>>>) so that one or more valid Python statements can be entered into it. To execute Python code in the cell, use the Run from Cell menu or use the Ctrl+Enter shortcut. 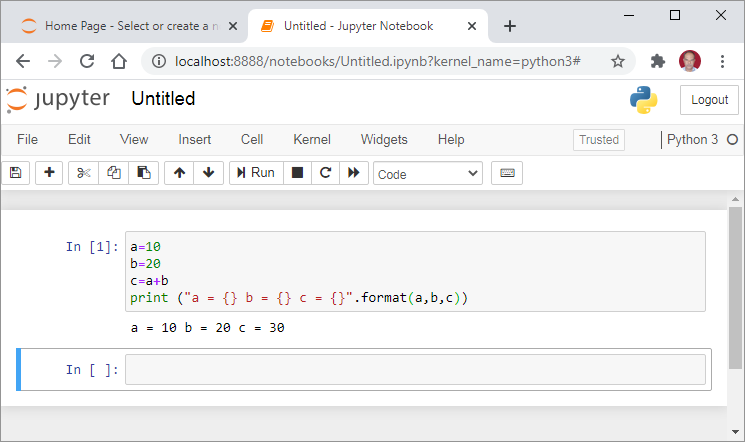 A list of various shortcut combinations is available. They can be accessed from the Help menu and can be suitably edited as per convenience.

There are three types of cells in the Jupyter notebook. Code cells, Markdown cells, and Raw cells.

The following figure shows a notebook cell with markdown formatting and its rendered version when run. 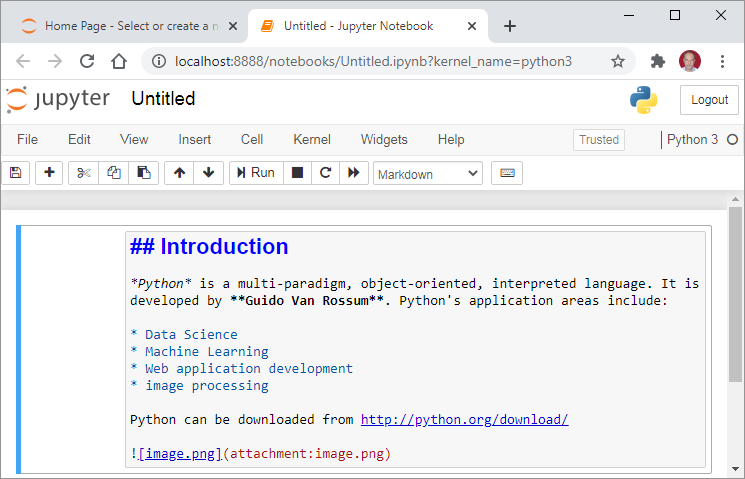 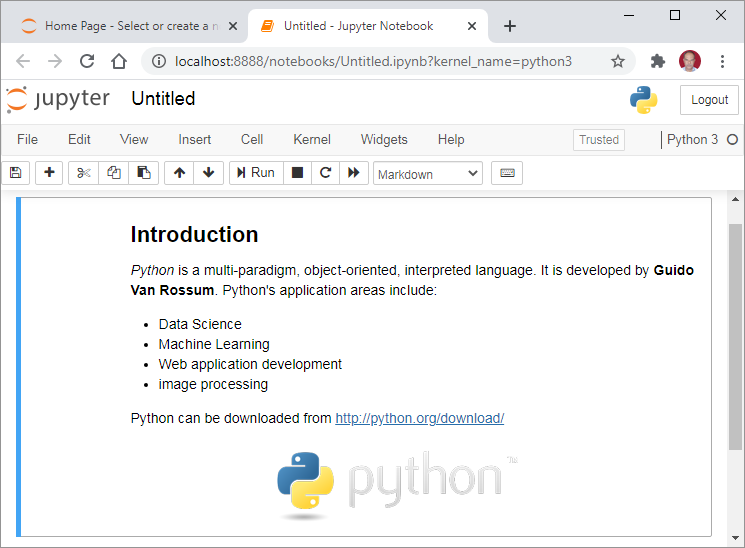 To know more about formatting markdown in Jupyter, visit https://guides.github.com/features/mastering-markdown/ 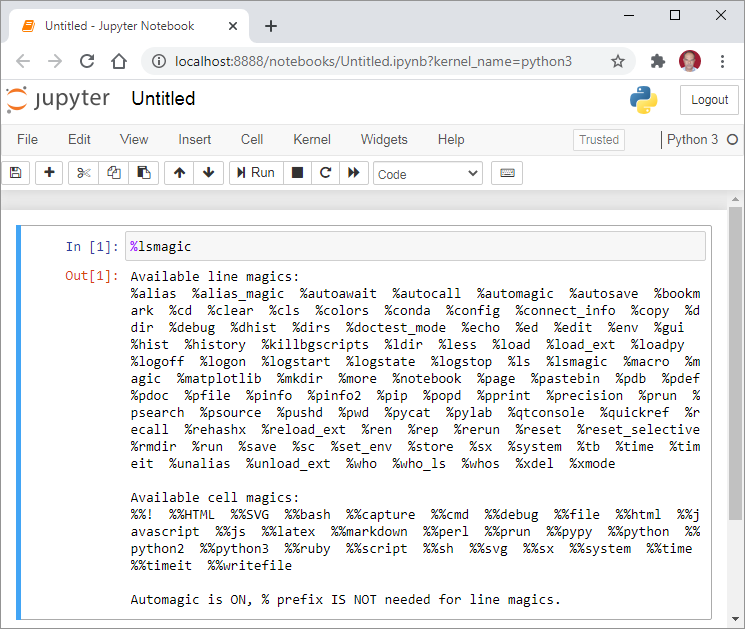 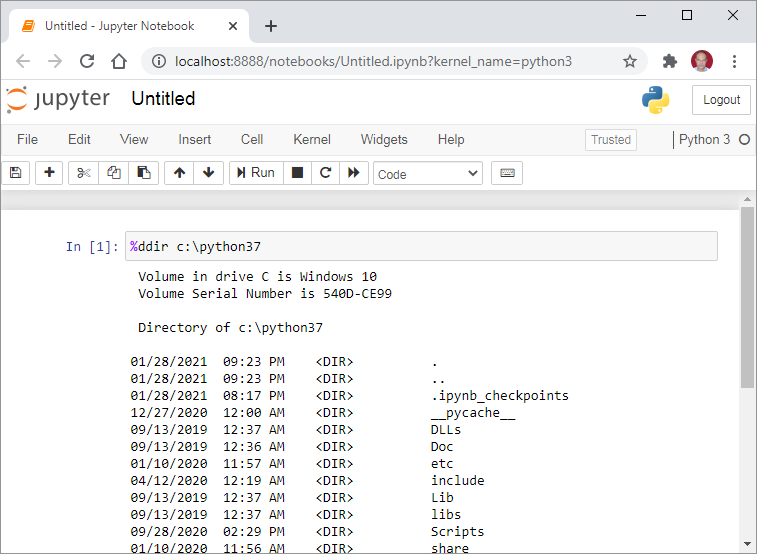 In order to render HTML output in code cell, use %%html command 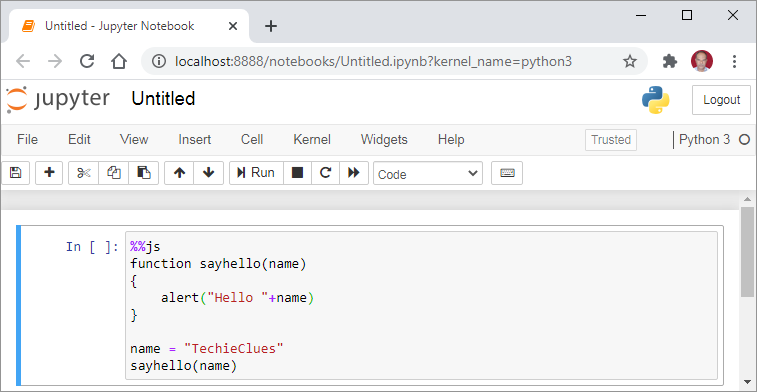 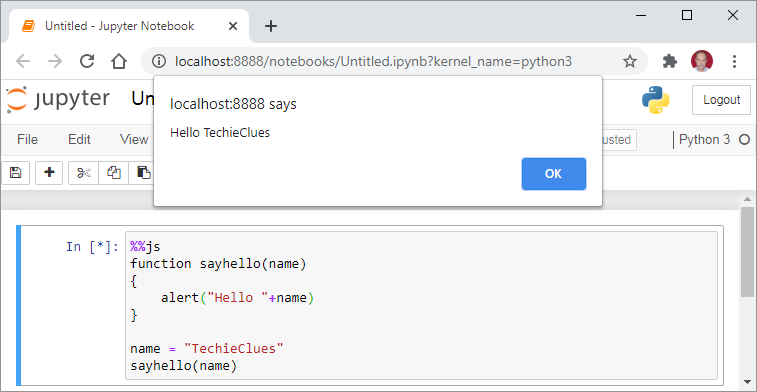 The %matplotlib is an important magic command. Notebook app is capable of rendering Matplotlib graphs along with the code. By adding %matplotlib notebook command, the plots are interactively rendered. It means, if the associated data is altered, the plot changes dynamically without having to re-run the code cell. 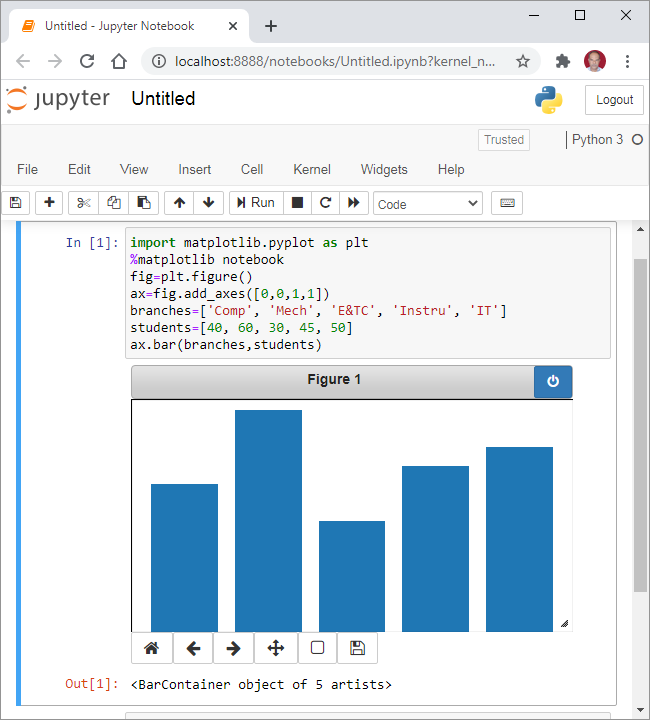 A notebook in the client browser’s window can be saved with the .ipynb extension. It can be converted into distributable formats such as PDF, HTML, MD, or LaTeX. You can also generate a slide show out of notebook cells.