The Lifecycle of a thread in Java

The lifecycle of a thread is a transition from one state to another. In java, there is a total of 6 states, and a thread can exist in any of them at any phase. The states are:

The initial state is NEW, and the final state of the thread is TERMINATED. So, the lifecycle of a thread is its journey from NEW to TERMINATED. 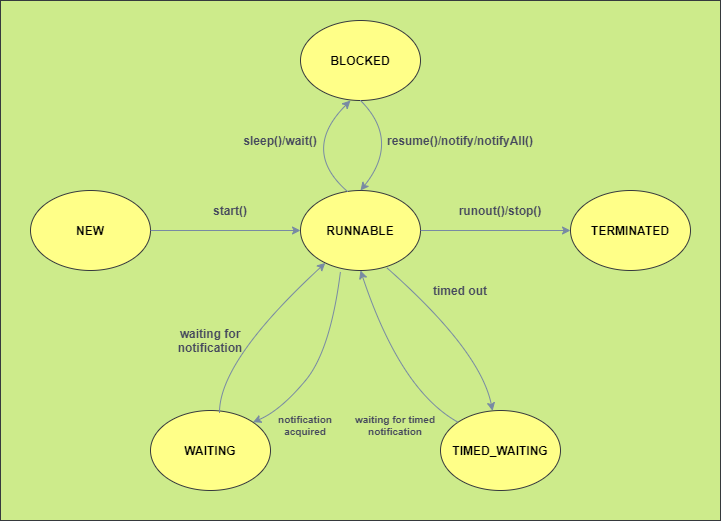 In Java, Thread.getState() is the method that is used to get the current state of the thread. The value of these states is available as the ENUM constants of the class java.lang.Thread.State.

When a RUNNABLE thread is waiting for any Input/Output operation to complete, it shifts to the BLOCKED state. Upon availability, the scheduler brings the BLOCKED thread back to the RUNNABLE thread. No CPU cycle is consumed in this state.

When a RUNNABLE thread yet to complete all its process,  waits for another thread on a specific condition. It goes into the WAITING state. Upon fulfillment of the condition, the WAITING thread resumes by again going to the RUNNABLE state. No CPU cycle is consumed in this state.

When a RUNNABLE thread gets into the TERMINATED state regardless of normal execution or any exception. This marks the last and final state of a thread. No CPU cycle is consumed in this final state.

This was all about the life cycle of a thread. We will learn to create threads in the next lecture.